Craving some meat-fall-off-the-bone BBQ ribs but no time to make them yourself?  Then pop by Die Fette Wutz in the heart of Mannheim’s Quadrat!

Die Fette Wutz opened in October 2017 in the heart of Mannheim.   The business model and food served are inspired by “Franklin Barbecue“, possibly the best barbecue joint in the US, winner of multiple awards.  On the menu are Texas-style BBQ classics such as pulled pork, briskets, pork spareribs, sausages, beef jerky, chicken and salmon, to name a few.

For many Americans living in the Rhine-Neckar region and beyond, this is a taste of home.

We heard of Fette Wutz, and wanted to sample their signature offerings.

Die Fette Wutz uses quality cuts of meats, and they make their own marinades, rubs, sauces, sides (chips!),salads and desserts (cheesecake!), so diners can be assured of authentic flavours.  Their pork and sausages are sourced from German butchers.  Beef, however, is imported from Nebraska USA in order to maintain authenticity of flavour and to ensure constant supply.  Homemade lemonades and at least 50 types of specialty and craft beers round up the offerings. 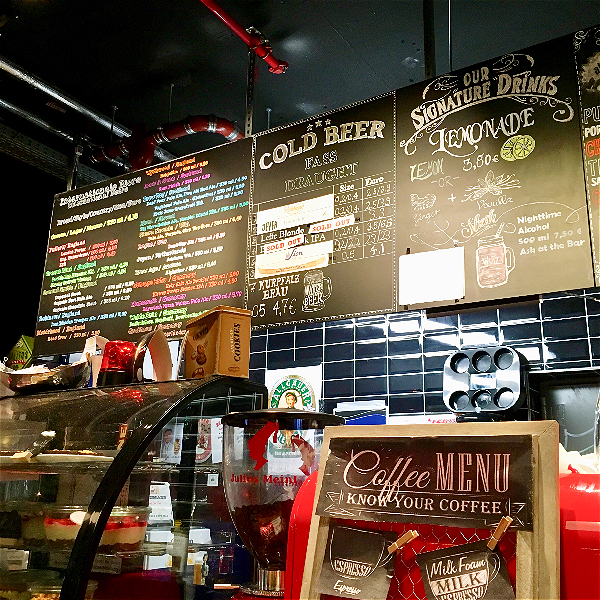 General  Manager Oliver Schmied took the time to explain how the meats are prepared and cooked.  With barbecue, “low and slow” is the golden rule of the cooking process — a low cooking temperature and a slow cooking speed.  Cuts such as briskets and meat chunks are large and need to be cooked at lower temperatures (90 to 120°C).   This way, the outside portion does not get overcooked while waiting for the proper internal temperature of the middle of the cut to be reached.

Meats differ in size and shape, so depending on the cuts, some could be dry.  Take for example Fette Wutz’s Angus brisket, a huge chunk of cow marinated only with salt and pepper.  It comes out of the smoker deep ebony and almost black, looking more like a meteorite than a meal.  Don’t be mistaken though — it is not burnt, and beneath the crust is tender meat with a husky, beefy flavour.  A few of us ended up with some meat slices on the dry side, which could happen when they are sliced from the flat muscle of the brisket.  This is where the BBQ sauces come in — they serve not only to enhance flavor, but also to balance textures.

Overall, we enjoyed our meal.  We found real-deal Texas BBQ — tender smoked meats and ribs full of flavor with sauces on the side (and not slathered all over), washed down with ice-cold beer and Southern-style iced tea.

Order and pay at the counter (no table service here), and find a favourite spot to enjoy your meal.  At Fette Wutz, you can enjoy a hearty BBQ Texas-style the whole year round, and not only during summer!

Looking for more ideas on where to dine in the Rhein-Neckar region?

Check out other reviews of places where Food Explorers have eaten.

Members can access our Directory of Restaurant Picks for tried-and-tested places to eat.  This directory is compiled by members for members – we do not receive any payment for the listings.