Recently on the radio, they were talking about how more information doesn’t necessarily lead to improved knowledge because we tend to dismiss the information that doesn’t express what we already believe, and hang onto new information which complements our beliefs.  It is no wonder then, that when I came across an article expressing all the wonders of red wine, I was more than willing to delve deeper into why it is so good for us. 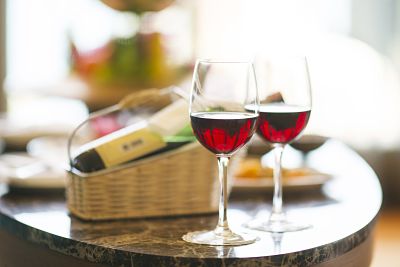 In the brain of Alzheimer’s patients there is a build-up of a protein known as β-amyloid peptides or tau protein.  A micronutrient, known as a polyphenol, found in red wine helps to stop the progression of Alzheimer’s by preventing either the formation of the β-amyloid peptide, or preventing the smaller protein bonds from combining into longer chains which later become the plaque that is seen on the Alzheimer brain.

The polyphenols found in red wine (and other foods) can stop this abnormal protein creation because they have anti-oxidant properties.  In other words, they react with the (potentially) harmful molecules within the body called free radicals.

Free radicals are atoms or molecules in our body that are highly reactive with other cellular structures because they contain unpaired electrons.  I won’t confuse you with the details, you just need to know that electrons are flighty little things that like to be partnered up so, a molecule with a lonely electron will search out another molecule with whom it can react in order to pair the electron, which, can become problematic as we will see later.  Free radicals are natural by-products of ongoing reactions in the body (such as the reactions needed to utilize the oxygen we breathe).  They are in fact essential to life.  For example, people who are unable to produce the free radical superoxide (O2.-), experience multiple and frequent infections because of the superoxide’s role in the immune system.  Problems arise however when the concentration levels of free radicals are too high.

Concentrations of free radicals in the body are increased by certain external stresses such as cigarette smoke, lack of oxygen, intense exercise, as well as air and water pollution.  When free radicals concentrations become too high they react with other molecules with whom they normally would not.  Chain reactions occur and eventually important cellular components such as DNA and other essential protein and fat molecules are affected.  Antioxidants (such as polyphenols) react with free radicals which prevents them from damaging vital cellular molecules.  If the ratio of free-radicals to antioxidants is too high, the body experiences a state called oxidative stress and at this point diseases can start to develop.

Polyphenols are not only found in grapes but in a multitude of plants where they serve to defend against ultraviolet radiation and pathogens.  Although fruit is one of their main sources, they are also found in vegetables, grains and legumes.  Depending on their chemical structure they are further classified as phenolic acids, flavonoids, stilbenes, and lignans.  The most common of these being the flavonoids.  Various food sources contain different concentrations of the individual polyphenols.  For example one subgroup of flavonoids is only found in citrus fruits.  Blueberries, blackberries and strawberries, red wine and green or black tea contain relatively high concentrations of a couple of types of flavonoids.  And of course, each polyphenol is absorbed and utilized differently, reinforcing the need for a varied diet.

Since polyphenols serve the fruit by protecting it against the surrounding environment, a high concentration of polyphenols are found in the skins and membranes of the fruit.  Therefore, to get the most from it, it is best to eat the whole fruit without peeling it.  Likewise, fruit with a high skin to flesh ratio will be better sources, for example cherry tomatoes will have a higher polyphenol content than larger tomatoes. 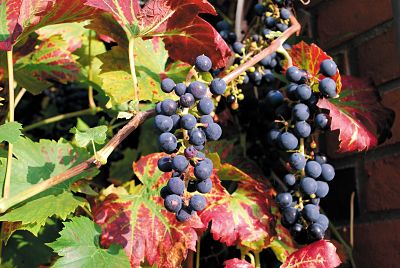 Mashing of plant tissues may lead to destruction of the polyphenols.  It is suggested therefore that eating fruit whole is better than in jams or juices.  Interestingly (and luckily for me), the crushing of grapes during the making of red wine seems not to impact the polyphenols and facilitates their diffusion into the juice, resulting in the fact that the polyphenol content of red wine is 10 times higher than that of white.  It is even higher than the concentration levels in grape juice!  I don’t understand why, but it’s one more reason to drink red wine, so I’ll take it.  Of course, these high concentrations also mean one or two glasses is plenty, so no need for red wine binges.

Polyphenols not only help in defence against Alzheimer’s, they have also been shown to have beneficial effects against many afflictions associated with aging including arthritis, cancer, lung diseases and cardiovascular disease.  Unfortunately pharmaceutical supplements do not have the same composition as natural polyphenols found in food and research has shown that they are often not as effective and, in some cases, have been harmful.

So add some berries to your oatmeal tomorrow morning.  Drink some green tea.  Enjoy a kale salad with oranges and cherry tomatoes for lunch.  And toast your health with a glass of red wine at dinner.