Food Explorers’ “From the Streets of Mumbai to Lahore” was inspired by the street food culture from different cities and regions of India and Pakistan.  There are many similarities and differences, but one common thread binds these dishes – authenticity.  Our guide for the evening is no other than our very own Cuisine Expert Amna Omer, who hails from Sialkot in Pakistan.

Amna is passionate about cooking, and she loves to feed people.  After the success of her first Pop-Up Dinner in 2017, she treated us to a second display of her culinary skills, further honed over the past 12 months.

Our meal began with the tangy, spicy yet light “Bombay Bhel Chaat” from the streets of Mumbai. “Bhel” was born as a Gujarati dish but evolved into a meal that could be tailored for tastes across India.  Jains eat their bhel with tomatoes; Bengalis add red pepper and mustard oil to theirs.  Our tastebuds were greeted by an explosion of colors, textures and flavors!

Up next was “Vada Pav”.  It is believed that there is no better place than a roadside stall to enjoy this authentic Marathi food.  Maharashtra runs on this Indian version of burger.  It is every Mumbaikar’s take-and- go quick bite.  Everyone, from students to elite businessmen, flocks to these vada pav stalls almost daily.   One bite of this and you won’t look at a burger the same way again!

“Dhaba-style Chicken Karahi“ was our main course.  This is a typical chicken curry found at eateries along Punjab’s national and state highways.  According to Amna, it is not unusual for customers to choose their chickens from those running around the streets and have them freshly-slaughtered for their curry!  “Karahi” refers to the bowl-shaped frying pan with two handles the curry is cooked in.

Dessert was “Gulab Jamun“.  This is a traditional dish from Bengal made from “khoya“, which is nothing but milk solids.  These are formed into balls before being deep-fried and soaked in spice-infused rose-flavored sugar syrup.  Certainly not for those on a diet, but they provided the perfect finishing touch to our street food meal!

A big “Thank You” goes out to our guests who supported this event and made it a success.  We can certainly look forward to more delicious dinners from Amna, and Food Explorers look forward to bringing you more of such evenings in the near future! 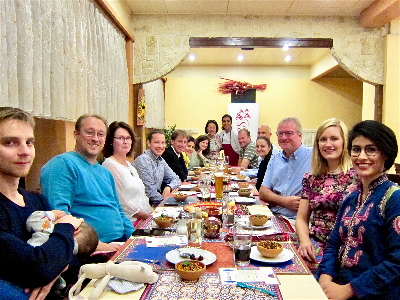