Dusk encroaches on the city of Taipei.

Waves of commuters hurriedly emerge from the exits of the underground metro system, students in an array of uniforms, freshly released from grueling tutoring sessions in ‘bushiban’ (補習班, extra tutorial classes) scurry along the streets, noisy scooters meander their way through the peak hour traffic chaos of buses, taxis and sedans – everyone is headed home. Dinner awaits.

Whilst it is normal for dinner to be a ‘home-cooked’ affair, it is just as normal for the people of Taiwan to purchase ‘xiaochi’ (小吃, little eats) from street hawkers to complete the most important meal of the day. Many prefer to head out of their small apartments altogether, to dine amongst the hustle and bustle of hawker stalls that make up the hundreds of ‘yeshi’ (夜市, night markets) dotted across the island. 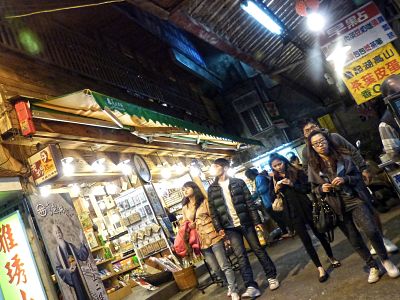 Taiwan, arguably, has one of Asia’s most famous night market scenes and boasts an unimaginable repertoire of tantilising street food. Food that has been shaped and influenced by Taiwan’s colourful past.

Originally inhabited by aborigines, the island was later settled by Fujianese and Hakka people from mainland China before being ‘discovered’ by the Portuguese in the 16th century when it was re-named ‘Formosa’ or beautiful island. Later colonized by the Dutch, the Spanish and finally the Japanese, Taiwan is now a thriving democracy after the Kuomintang army lead by Chiang Kai-shek retreated from communist China in 1949 to the island with more than two million mainland Chinese people, most of mainland’s China’s gold reserves at the time and a staggering collection of ancient Chinese artifacts.

My favourite yeshi has to be the Peitou Night Market, a leafy and mountainous suburb north of Taipei, famous for its natural hot springs, where in winter, plumes of sulfuric scented hot steam rise from street gutters and waterways. By dusk, the Peitou Night Market is awash with patrons, some on scooters, darting from hawker to hawker, collecting the night’s feast to be served at home, but most are on foot, casually strolling the luminous market under darkening skies, pondering what to snack on next. 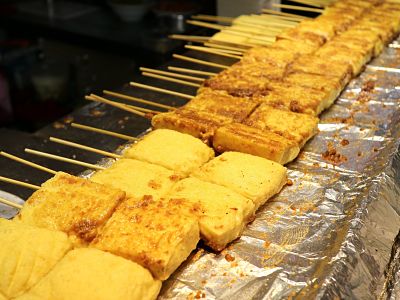 Stinky tofu is a Taiwanese night market staple. Ordinary tofu is fermented in pots of brine and fried to a crispy golden yellow before being served piping hot, drizzled in a delicious concoction of light sweet soy sauce and freshly pressed garlic, the dish perfectly balanced by a side of crunchy pickled cabbage, carrots and cucumber. Lovers of stinky tofu would refer to its fermented stench as an aroma – much like the way Europeans describe the smell of cheeses. It’s safe to say that one can ‘look’ for a stinky tofu hawker stall in a market on any given night by following one’s nose.

Peitou was my childhood home for six unforgettable years. A retired Kuomintang soldier by the name of Lao Yan owns the famous stinky tofu stall at the Peitou yeshi. Lao Yan has witnessed the comings and goings of four generations of my family – whom have all at some point, sat perched on a plastic chair in front of the scorching fryer chowing down delicious hot fermented tofu. From my Shanghainese grandparents who also came to the island of Taiwan with the Kuomintang, to my biracial parents during their courtship and later their split, to myself dining there as a little girl with my single mother and later with my German husband and a little girl of our own.

Lao Yan is no longer there, but his hawker stall lives on and has been taken over by his daughter, who continues his legacy through good, unforgettable food.