In 2016, the weekly Hamburg-based newspaper “Zeit Magazin” wanted to know where one could get good ice-cream in Germany.  Over 33,000 readers nationwide responded, nominating their favorite ice cream parlors.  The top 15 are compiled in this map below:

Lucky for us based in the Rhine-Neckar region, 2 of the 15 are located close by: Vannini in Worms, and Zeitgeist in Mannheim.

In business for more than 30 years, selling authentic gelato – the Italian word for ice cream (the word literally means “frozen”).  In case you are wondering, here are the differences are between gelato and ice cream:

Every “Gelato Artigianale” flavor is produced fresh daily, without preservatives.  Vannini uses 100% milk fats and cream for their gelato, and no vegetable oils.  Whenever possible, specialty ingredients are sourced from regions well-known for them – for example lemons and pistachios from Sicily, hazelnuts from Piedmont, amarena cherries from Vignola, and fine chocolate from Belgium and The Netherlands.  Fresh fruits are sourced locally from the region. 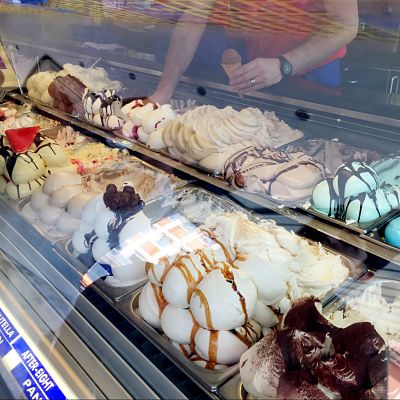 Vannini draws the crowd with sheer variety – 44 flavors, and over 40 creative combinations to try!  A large signboard spans the length of their ice cream counter, displaying the various combinations on offer.  By duplicating some of the images, and cleverly placing them in random order on the signboard, customers get the impression that there are over 100 combinations to try, so they keep coming back.

On sunny days, customers can grab a seat in the outdoor seating area behind the gelateria, or at the illy Café next door and enjoy a cup of Italian coffee with their gelato.

The next time you are in Worms, pop by Vannini in Marktplatz 1 for a taste.  If it’s too far to go to Worms, find an outlet closest to you in Neustadt, Bad Kreuznach and Weinheim.