It’s Britain of 1920s.  The Food Explorers have been enlisted to help Chief Inspector Watson and his constable unravel the murder of the eccentric Lord Jeremiah Highgrove, an Englishman who made huge profits from investments in the arms industry.  On the day of his death, he had wanted to announce a drastic change in his last Will, which had been updated a mere 18 months ago.

We know that one of the four potential heirs of Lord Highgrove had committed the murder, but who?  Chief Inspector Watson presented us with the evidence available to Scotland Yard, and recruited volunteers to re-enact the murder.  Volunteers also played the roles of the suspects, who issued their statements.  The rest of us had to figure out the motive for the murder, and the mistakes the murderer unwittingly made.

Our 7 volunteers were good sports – they did a great job bringing their characters to life!  The reenactment of the murder and a tasty 3-course British meal set the tone for the evening, and the subsequent interrogation of suspects certainly gave everyone a mental workout.  We were grouped into teams and provided with an array of elaborate evidence and investigation files to work through.  Three out of four investigative teams correctly deduced who the murderer was – well done!

Chief Inspector Watson and his constable were very entertaining, and there was never a dull moment in their performance.  A big “Thank you” to everyone who joined in on the fun this evening, for making this Murder Mystery Dinner a success!

Click on the link below for a slideshow of highlights from “A Murderous Legacy”: 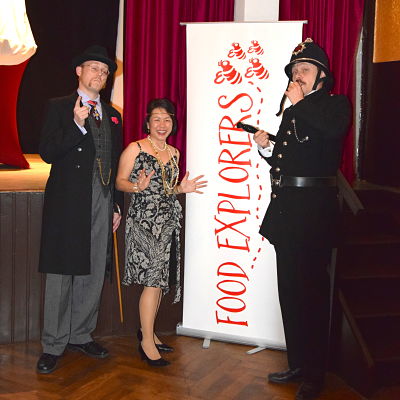