Food Explorers’ Pop-Up Dinner “Pakistani Fusion” was inspired by Pakistan’s ethnic and cultural diversity.  Not only is Pakistani cuisine characterised by elements from its Mughal legacy, it is also a blend of various regional cooking traditions of the Indian subcontinent, Central Asia, and neighbours China and Iran.

Our guide for the evening is no other than our very own Cuisine Expert Amna Omer, who hails from Sialkot in Pakistan.

Amna is passionate about cooking, and she loves to feed people.  This is the third installment of her successful series of Pop-Up Dinners, after “East Indian Expedition” in 2017, and “From the Streets of Mumbai to Lahore” in 2018.

On this cold winter’s day, “Chef’s B36 soup” was exactly what we needed to warm us up.  Chinese restaurants established themselves in Pakistan during the 1930s.  The influx of Chinese migrants during the 1940s brought further diversity and developed a distinct Pakistani-style Chinese cuisine.  Today, there isn’t a restaurant in any town which doesn’t serve this hearty broth loaded with fresh seasonal vegetables, chunks of chicken and tweaked with hot fiery sauces.

Up next was “Amritsari Tawa Fish with Masala”, a winter specialty from the Kasur region near Lahore, and also in Amritsar in India.  Amna marinated pieces of succulent tilapia in spices and then fried  them in a hot “tawa” (iron griddle).  To accompany this dish, we had mango salad and tamarind chutney.

Our third course was “Chicken Shawarma“.  Pakistan has a long-standing history with Arab Gulf countries, particularly Saudi Arabia and the UAE.  The earliest migrant workers in Saudi Arabia and the UAE  in the 1950s and 60s were from Pakistan.  The workers who returned to Pakistan brought the Arabic “Shawarma” home with them, customising it with Pakistani spices.  Today, you can find a “Shawarma” vendor at every nook and corner, serving up juicy chicken baked in a yogurt marinade, rolled up in pita bread and served with tahini.  Amna paired her version with homemade Pakistani fries.

For dessert, Amna drew upon the concept of the “Trifle“, which was brought to the region by the British Raj.   The Brits moved out of Pakistan in 1947, but this English creation stayed on.  Imagine a dessert interspersed with layers of lemongrass-infused custard, raspberries and soft cake sponge.  This sweet delight, along with some chai tea added the perfect finishing touch to our fusion meal!

In between courses, we even got the chance to “work” for the evening’s recipes, by way of a word search!

A big “Thank You” goes out to our guests who supported this event and made it a success.  We can definitely look forward to more delicious dinners from Amna, and Food Explorers look forward to bringing you more of such evenings in the near future! 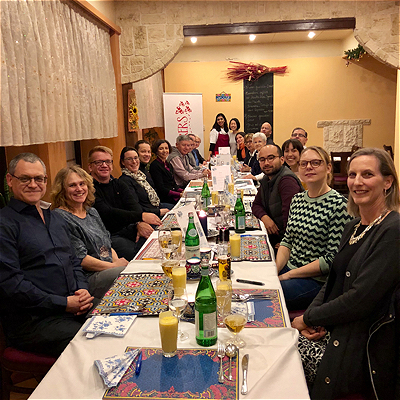